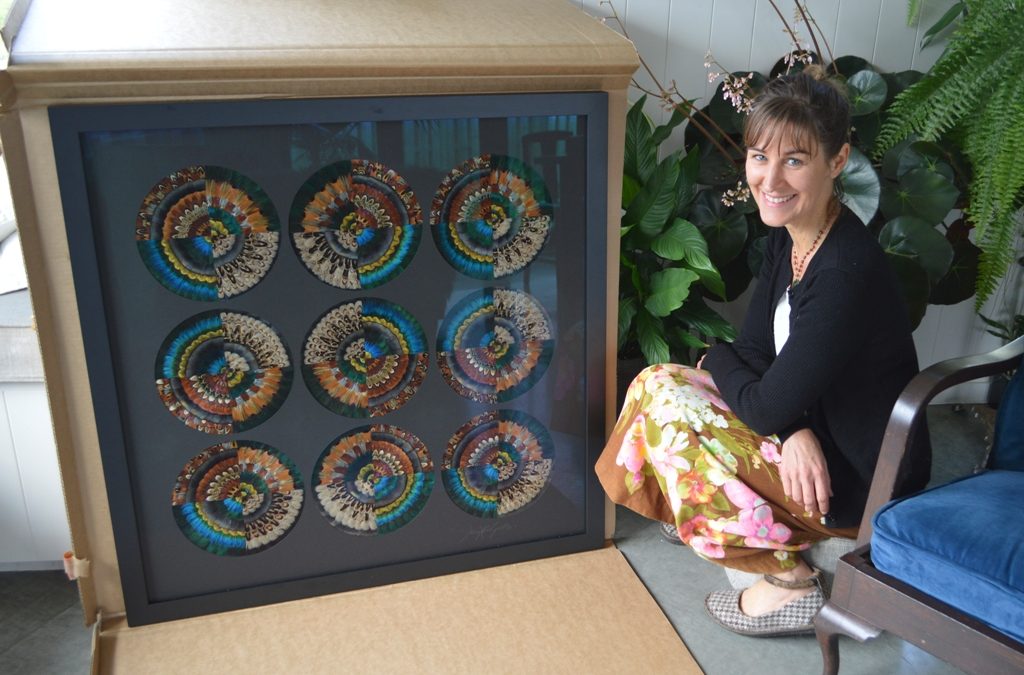 POSITIVE intentions and mathematical relationships are some of the factors in Opotiki artist Fiona Kerr Gedson’s current work.

Recognised nationally and internationally for her art, Kerr Gedson has specialised in creating intricate mandalas from the feathers of birds.

The art form has its origins in ancient Buddhism and, with her background in Maori weaving technique, Kerr Gedson has added a distinctively New Zealand angle to the meditation practice.

â€œTrue to the aim of the mandala meditation traditions, the pieces are designed to help the viewer find a gap in the bustle of everyday life,â€ she said.

Kerr Gedson said her artwork had undergone a shift two years ago when she started to bring geometry into her mandala work.

A radio interview with Ockham Residential’s Mark Todd had inspired her and added a new dimension to her mandalas.

â€œHe is a mathematician who is using his thinking to create positive solutions and contributions to society,â€ she said.

Mathematical thinking was a way of enhancing creativity, of problem-solving in real life situations.

With mandalas having been used as a meditation tool for a long time, Kerr Gedson hoped that her â€œgeometrically enhancedâ€ mandala would further expand quality relationships and be positive contributions.

When the OPOTIKI NEWS caught up with the artist, she was shipping one of her artworks as an entry to the Rotorua Art Awards, which will be held at the Sir Howard Morrison Performing Arts Centre on September 8.

Another of her pieces has been selected as a finalist in the Arts Gold Awards, with the announcements from the judges coming on Saturday, September 16 at the Russell Henderson Gallery in Alexandra.

There is more good news from the deep south, with Kerr Gedson having been chosen for a joint exhibition with Waikato-based artist Annemieke Farmilo during the upcoming holiday season.

Running from December 21 to January 11, the exhibition called â€œBy Natureâ€ will be displayed at an exclusive exhibition space in Queenstown.

Artbay Gallery founder Pauline Bianchi said the two artists had been selected for the exhibition because of their â€œstriking and uniquely New Zealand styles, which utilise raw, natural materialsâ€.

â€œThe exhibition will appeal to those with an interest in nature and contemporary New Zealand art,â€ she said. Bianchi said the works by the two artists would be showcased in the Artbay Gallery’s new and exclusive exhibition space.

Kia ora. If you would like to keep up to date with Fiona’s new works, exhibitions and news please fill in your details here.